Report from the three-day Remote Sensing workshop held at the University of Alaska Fairbanks from April 4-6, 2017. The interagency, international workshop was hosted by the Alaska Fire Science Consortium (AFSC) with funding from the NASA Applied Sciences Program to bring sciences users and producers together to explore new opportunities for applied remote sensing research in boreal and arctic fire management.

The research is highlighted in an AFSC research brief and accompanied by a detailed report with methodology/figures and tables.

GIS data and Python scripts from the project are available. 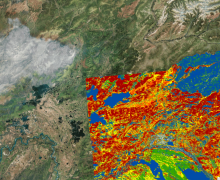 Wildfire Hazard, Potential, and Risk: A Description of Concepts and a Discussion of the Risk Assessment Process

In this Research Brief, Robert Ziel highlights and defines different aspects concerning the science of fire hazard, potential, and risk to provide a concise handout that was made in conjunction to the 2019 Spring Fire Science Workshop by identifying the different fire potential assessment efforts and comparing them with the assessment tools available. 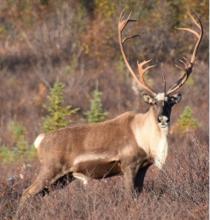 Fire, Lichens & Caribou: What Do We Know?

Caribou herds in North America seem to be declining.  Is warming climate or it’s effects on habitat to blame? The relationship of caribou to lichen-rich winter ranges and fire is often oversimplified.  Many factors besides habitat affect caribou numbers, which undergo large fluctuations naturally.  In this Research Brief, we highlight recent publications on caribou-fire relationships and explore some of the factors that make it complicated to predict exactly what will happen and when if old-growth caribou habitats diminish with warming climate and more frequent burning. 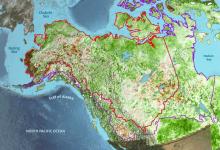 It’s hard to keep up with the myriad investigations NASA ABoVE campaign is working on in Alaska.  This short research brief is a round-up of recently published fire effects field studies and remote sensing products research and has some LINKS to show you where to access some intriguing new datasets and project results.  The “Big Data” coming from ABoVE is going to be a big boost to conducting regional or state-wide fire trends and assessments–you’ll want to know where that data lives.

An update from AKFireInfo about the Livingston Fire mentions smokejumpers setting up sprinklers around 5 cabins about a mile from the head of the fire. This is a common tactic for protecting isolated values at risk, but we did not have good information on how much sprinkling was needed and how long wetting down an area would last. Until now.

Devon Barnes, a graduate student at the University of Alberta, worked with BLM-Alaska Fire Service Fire Ecologist Eric Miller to measure the effect of sprinkling on interior Alaska feathermoss fuel beds. Their work found that it takes 0.8 inches (20 mm) of sprinkled water to bring the top 5 inches of duff to saturation. This takes about 7 hours of sprinkling with a Mark 3 pump at a low throttle, and uses about 2 gallons of gas. Devon and Eric estimate that the sprinkled area can resist ignition by firebrands and surface spread for about 3 days in typical summer weather. The area may of course dry more quickly in very hot and windy conditions.

There are at least 5 important factors that lead Alaska fire managers to continue their use of the Canadian CFFDRS system of fire danger and fire behavior tools for fire potential assessments in Alaska.  Fire behavior expert Robert “Zeke” Ziel gives a succinct review of them in this illustrated 3-page report.  Essential reading for anyone involved in fire management here in the 49th state! 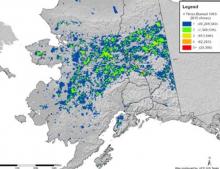 A Deeper Look at Drivers of Fire Activity, Re-burns, and Unburned Patches in Alaska's Boreal Forest

Alaska’s fire managers are well aware that most boreal burning occurs during relatively brief periods of high fire activity. This was well-illustrated in the 2015 fire season. There is also evidence to suggest that fires may be more severe (Barrett and Kasischke 2013) and resistant to control during these periods. Scientists and managers both seek better understanding of why and when these periods are likely to occur. Fire protection agencies would like to have longer-term seasonal fire activity predictions for preparedness and strategy decisions while land managers and scientists want to inform models of long-term ecosystem response to changes in climate and/or vegetation succession and repeat disturbance.

Although vegetation treatments can reduce fire potential, they may have unintended ecological effects, but there has been little published on possible impacts—especially for Alaska. So the publication (Melvin, et al. 2017) of a study on interior Alaska fuel treatments by an interdisciplinary team of researchers is an important addition to regional management resources. In fact, it probably represents the FIRST published paper specifically on how fuel-reduction affects carbon and nutrient pools, permafrost thaw, and forest successional trajectories. The analysis included 19 sites managed by numerous Alaska agencies covering a large swath from Nenana to Deltana, and were sampled at various ages from 2-12 years post-thinning or shearblading. 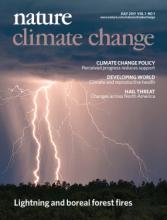 Future Fire Regime in Alaska: a Look at the Role of Lightning

This Research Brief covers a new NASA-funded study led by Sander Veraverbeke of Vrije Universiteit  in Amsterdam which found lightning storms to be a main driver of recent large fire seasons in Alaska and Canada.  Results of the study are published in the July, 2017 issue of Nature Climate Change.

MODIS (Moderate-Resolution Imaging Spectroradiometer) satellite images and data from ground-based lightning networks were employed to study fire ignitions. Sander’s analysis found increases of between two and five percent a year in the number of lightning-ignited fires since 1975. Veraverbeke said that the observed trends are consistent with climate change, with higher temperatures linked to both more burning and more thunderstorms.

Study co-author Brendan Rogers at Woods Hole Research Center in Massachusetts says these trends are likely to continue. “We expect an increasing number of thunderstorms, and hence fires, across the high latitudes in the coming decades as a result of climate change.” This is confirmed in the study by different climate model outputs.

Charles Miller of NASA’s Jet Propulsion Laboratory in California, another co-author, said while data from Alaska’s agency lightning networks were critical to this study, it is challenging to use these data to verify trends because of continuing network upgrades. “A spaceborne sensor that provides lightning data that can be linked with fire dynamics would be a major step forward,” he said. Such a sensor exists already– NASA’s spaceborne Optical Transient Detector –but it’s geostationary orbit limits its utility for high latitudes.

The researchers found that the fires are creeping farther north, near the transition from boreal forests to Arctic tundra. “In these high-latitude ecosystems, permafrost soils store large amounts of carbon that become vulnerable after fires pass through,” said co-author James Randerson of the University of California, Irvine. “Exposed mineral soils after tundra fires also provide favorable seedbeds for trees migrating north under a warmer climate.”