When smoke drifts onto transportation thoroughfares it jeopardizes the safety of all of those who encounter it. Particulates in smoke scatter light, reducing visibility and causing dangerous conditions on roadways and airports. These conditions can result in vehicle accidents and grounded flights. Smoke movement varies with meteorological conditions, and has the potential to move quickly onto roadways, leaving little opportunity to warn motorists of the dangerous conditions.

When particulates in smoke mix with moisture, either released from burning vegetation or during humid conditions, the impact to visibility intensifies. In some cases, this occurrence forms uncommonly thick fog banks sometimes referred to as "superfog". When present at night this dense fog can render car headlights nearly useless, and is often extremely hard to detect until encountered. 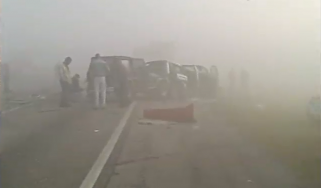 This potentially hazardous situation should be a consideration in both prescribed and wildfire settings. While not directly attributed to smoke, dense fog such as this played a substantial role in the Alligator Alley Incident.

For more information specifically about this topic, its affects, and mitigation measures, download the Smoke and Roadway Safety Guide.