Because fire personnel often work in close proximity to the source of emissions, they are often exposed to high concentrations of pollutants. An exposure study conducted by Reinhardt and Ottmar (2004) from the Pacific Northwest Research Station evaluated the exposure of firefighters to smoke in the Pacific Northwest and found that firefighters are exposed to significant amounts of particulate matter, carbon monoxide, acrolein and formaldehyde. The study found that those working in prescribed fire were exposed to higher levels of pollutants than those working to suppress wildfires. Furthermore, those working within designated fire lines, and performing direct attack were exposed to the highest amounts of pollutants, while those working in the early stages of fire suppression, such as initial attack, suffered the least exposure.

While a certain amount of exposure is unavoidable, the above study made several suggestions to help preserve firefighters' health. The study recommended amending health and safety standards to account for the long hours, heavy exertion, and high elevations often encountered by firefighters which often exacerbate exposure to pollutants. Further study of particulate matter was recommended to better determine whether or not particulates encountered by firefighters are inert, and to better understand the degree of exposure to dusts such as silica. Recommendations from the National Wildfire Coordination Group included improving firefighter awareness of health impacts, incorporating tactics in fire management to reduce firefighter exposure, such as reducing mop up time, and better monitoring health and pollutant levels.

Due to close proximity to fires, base camp workers and support personnel can experience the same levels of pollution as many firefighters. 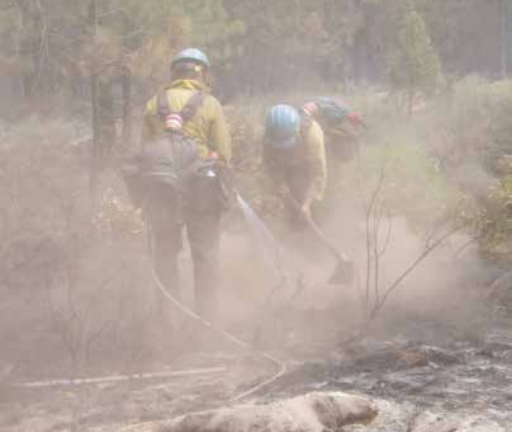 To watch a short video overview of the smoke health impacts to fire personnel, the causes, risks, and how you can mitigate them, we suggest viewing Smoke: Know the Risks. More in-depth information is available via the Wildland Fire Personnel Smoke Exposure Guidebook.

For further information, and additional research on effects of smoke from fires, visit the Fire and Environmental Research Applications Team web site.