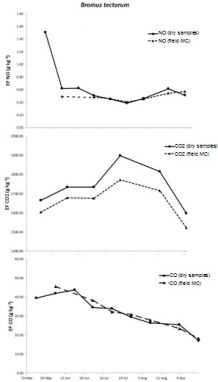 The importance of wildland fire as a source of trace gas emissions to the atmosphere has been demonstrated in the scientific literature and through numerous NASA funded campaigns to further understand the drivers and impacts of these emissions (e.g., SAFARI 1992, SAFARI 2000, TRACE A, etc). Most studies quantify emissions using remotely sensed data through multiplying the area burned, the quantity of fuel combusted, and the emission factors of a given gas species (EFX, grams of gas, X, emitted per kilogram of fuel consumed). The latter is known to exhibit considerable uncertainty and indeed a prior study as part of NASA's SAFARI 2000 campaign highlighted a seasonal dependence of carbonaceous gas species emissions. In this study, rangeland grass and shrub species were collected periodically from northern Great Basin shrub-steppe ecosystems during the typical burn season and burned in a small-scale laboratory setup where major carbonaceous and nitrogenous emission species were monitored and measured. Preliminary results indicate that emission factors of several major gas species, including carbon monoxide and nitrogen oxides, vary considerably over the course of a season. Large differences in emission apportionment between the rangeland species also suggests that shifting vegetation composition (via replacement of native with invasive species) can have a significant influence on emissions from semi-arid ecosystems. Further development of this data could lead to an enhanced understanding of how emission factors vary seasonally and how total emissions change with major vegetation shifts in other ecosystems. 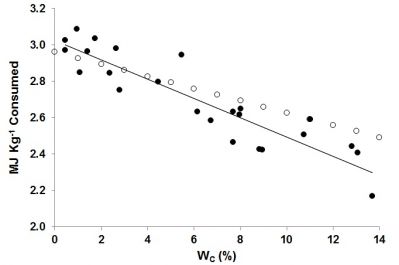 Satellite based fire radiant energy retrievals are widely applied to assess biomass consumed and emissions at regional to global scales. A known potential source of uncertainty arises from fuel moisture but this impact has not been quantified in biomass burning studies. Controlled fire laboratory experiments are used in this study to examine the biomass consumed and the radiant energy release (Fire Radiative Energy, FRE [MJ]) for western white pine needle fuels burned with water content (Wc, unitless) from 0.01 to 0.14. Results indicate a significant relationship: FRE per Kg of fuel consumed = -0.053 WC +3.025 (r2=0.83, n=24, p<0.001) and imply that not taking into account fuel moisture variations in the assumed relationship between FRE and fuel consumed can lead to systematic biases, since we show here that fuel moisture has a discernible and significant effect on the amount of FRE emitted per unit mass of fuel consumed. A methodological framework to derive a revised formula that enables the estimation of biomass consumed from FRE, which explicitly takes into account fuel water content, is presented.

Western juniper (Juniperus occidentalis ssp. occidentalis) woodlands have been expanding into the sagebrush (Artemisia spp.) steppe of the Great Basin at an unprecedented rate since the late 1800’s. The expansion and maturation of juniper woodlands in the sagebrush steppe ecosystem has resulted in shifts in understory species composition and successional status as well as influenced the development and spatial distribution of duff and organic soil properties. The alteration in ecosystem structure dynamics inherently affects the presence and availability of wildfire fuels. The current research project aims to examine the influence of duff properties on fire severity in western juniper woodlands. More specifically, the effect duff depth and moisture have on duff consumption and post-fire vegetation response. Species composition data has been collected along a duff depth gradient in areas previously burned under wildfire conditions during the Tongue-Crutcher Wildland Fire Complex in 2007. Field sampling and subsequent laboratory combustion of juniper duff under varying depth and moisture conditions is being conducted and analyzed to determine potential correlation between these properties. Additionally, wavelet analysis of 1-m aerial photographs is being utilized to create spatial representations of duff depth, consumption, and soil heating as a function of western juniper crown diameter, distance from the juniper stem, and laboratory experimentation. Goals of this study are to reveal additional knowledge of the influences of duff properties on fire severity and vegetation response, as well as demonstrate capabilities of wavelet analysis in scaling tree-level data to the stand and landscape scale.